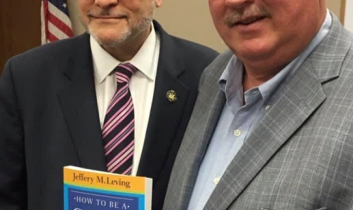 July 27, 2019 — FEI President Emeritus Jeffery M. Leving at the Illinois Council on Responsible Fatherhood annual symposium in Belleville, Illinois. Mr. Leving is the chairman of the governor-appointed council. Leving introduced Belleville Mayor Mark W. Eckert, who was a litigant in the Eckert vs. Eckert child custody case which the Illinois Supreme Court decided in 1988, upholding Mr. Eckert’s rights as a father. The mayor spoke about the case at the symposium. Leving also introduced the keynote speaker, Antwan Turpeau of the Department of Children and Family Services, who spoke about his experience growing up in foster care. FEI literature was distributed at the symposium.
The symposium featured a panel discussion at which Dr. Anita Bazile-Sawyer, a psychiatrist with the Illinois Department of Corrections, spoke about the benefits of virtual visitation, an area of focus for FEI.